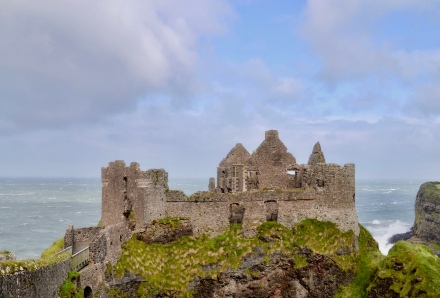 We visited these 3 locations on our first full day on the island during practically gale force winds. The weather for the most part of our whole Irish adventure though was generally cloudy but warm with plenty of sunshine in between passing rain showers. We just had this one day of strong winds, so we decided to use the Causeway Rambler bus service which picks up from a bus stop on the site and runs throughout summer until the end of September. The buses are roughly hourly both ways between Coleraine and Ballycastle.

We bought an all day rambler ticket on the bus (£9 each) and our first destination was to Portrush where we walked/were blown along the West Bay seafront before stopping at the Babushka Kitchen Cafe for a coffee. We just had a general wander around the seaside resort for a couple of hours as it was fair to say we probably weren’t seeing it at its best. Just a few weeks earlier, though, the town had been awash with golf fans from around the world as this year’s Open Championship was held at the Royal Portrush Golf Club.

After Portrush, we hopped back on the bus and off again at the medieval Dunluce Castle. This was a great visit. The wild weather really enhanced our experience of the rugged landscape and the quite extensive castle ruins which perch on the cliff edge. We spent a good while around this site, taking photos and exploring every nook and cranny, before finishing off with another coffee/tea at the Wee Cafe & Gift Shop which is next door and interestingly decorated with a mass of trinkets and gifts. More importantly though, the cakes here are absolutely delicious. It was a busy little place even on such a day. As we left to catch our next bus the staff were trying to re-attach the front door that had blown off its hinges 💨😮

After a great couple of hours exploring Dunluce and enjoying coffee & cake, we walked back a 100 yards or so to the bus stop on the main road. Being on the coastal road, the bus stop was very high and exposed but we managed to stay upright until we could jump back on the bus and off again at the old seaside fishing village of Portballintrae.

By the time we reached Portballintrae, just walking in the wind was a challenge along the front, and the rain had set in so we found ourselves a window seat in the Bay View Hotel bar which gave us a panoramic view of the village coastline, the crashing tide, and waves of rain showers which we watched coming in from the sea and crashing up against the hotel window. It was also quite entertaining watching other people being blown in through the door for shelter and a relaxing pint.

By the time we’d got back to Jolly by bus, we were ready to cabin up and snuggle down for the night. It had been a great day that had definitely blown any cobwebs away and we looked forward to visiting the Giant’s Causeway the next morning.