Well, for our first outing of 2017, Jolly took us back up to the Lake District.  This time we stayed just a couple of miles outside Ambleside, a lakeland town situated at the Northern point of Lake Windermere.  It was our first visit to Skelwith Fold Caravan Park.  The site has excellent facilities and is situated at the end of a long red tarmac roadway, well away from the main road providing tranquility in a woodland setting with static holiday homes and spaces for touring caravans & motorhomes.

We booked a premium pitch, fully serviced with an added chill space including a picnic table (we made use of this too, despite the weather, for a late night brew outside and brekkie the following morning 🙂 ).

We arrived in light rain and it pretty much persisted it down for most of the weekend, but this is the Lake District which is beautiful rain or shine, and a little rain never hampers exploration of places in any way.

Our first afternoon was spent out and about on our bikes.  The surrounding hilly roads put our legs through their paces at times.  While we were out we cycled up Duck Hill which brings you to the delightful Drunken Duck Inn standing at the crossroads at the top.  It’s impossible to resist a thirst quenching real ale, or whatever your chosen tipple, when you reach this point (fact!). 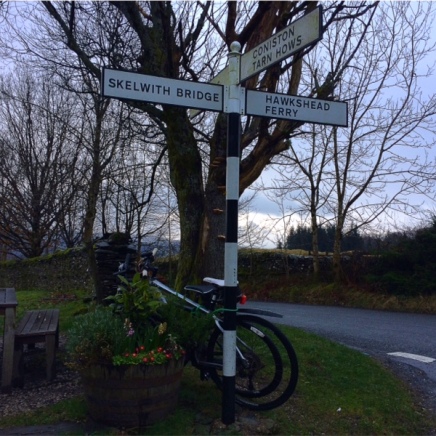 A good push up Duck Hill brings you to the crossroads 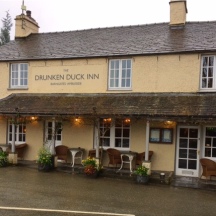 View from the crossroads

The Inn is cosy, welcoming, relaxing and beautifully decorated with dried hops hanging from old oak beams.  We spent a good hour enjoying the atmosphere here.  It’s a busy Inn & Restaurant, and although we didn’t eat here we know it to have a great reputation for food and accommodation also.

Instead, we ate a little later on just a mile or so away at The Outgate Inn on the B5286.  The food here was delicious and set us up well for our ride back to site, followed by a brew beneath the stars on our return to Jolly, before it was time to cabin up for the night.

The next morning, after breakfast, we donned our walking gear and headed out on a walk from site (top end through the playground area) descending a quiet, country lane to Skelwith Bridge, in the small village of the same name.

We crossed over the bridge, turned immediately left at Chester’s cafe and followed the path alongside the River Brathay, heading upstream.  Soon we encountered Skelwith Force Waterfall, where we took the steps down to the rocks to stand a while taking in the impressive sight and thunderous gushing sound of what is known to be quite a magnificent and dramatic small waterfall after heavy rainfall. 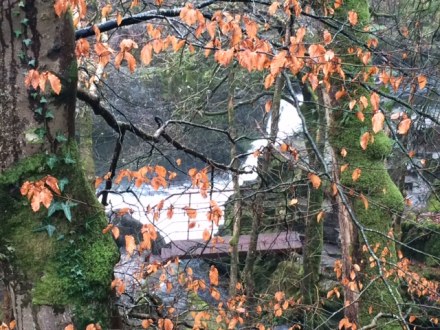 We continued along the path which brought us out alongside Elterwater lake, one of the smaller lakes of the Lake District.  By this time the mist and rain had lifted for a while to reveal the majestic backdrop of the Langdale Pikes.  We cracked open a flask of coffee here to allow us time to enjoy the scenery before continuing along the lakeside into Elterwater village which is situated in the Great Langdale Valley. 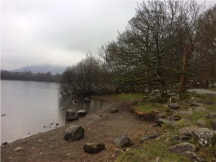 There is a pub in Elterwater – The Britannia Inn – which is a welcome sight after a walk.  A steady flow of walkers descend on this pub throughout the day from all directions and a variety of walks.  It has a friendly feel to it and more importantly provides a good pint!  The food looked rather scrummy too but we didn’t eat.  Instead we found a seat in the tiny bar area and enjoyed a couple of real ales – ‘Bluebird’ and ‘Britannia Inn Special’, both by the local Coniston Brewery and a Jenning’s ‘Neddy Boggle’.

We then took our time strolling back to site along the same route, calling in at the Talbot Bar section of the Skelwith Bridge Hotel before the final uphill stretch back to site.

On return to site we’d clocked up a leisurely 8.5 kilometers (5.2 miles) walk, and more than satisfied the pedometer for the day 🙂  The rain had really set in by this time and we were happy to be back on board Jolly where we got out of our rain-soaked clothes and ate tea before chilling out for the rest of the evening.

A feast for hungry tums back on Jolly

We thoroughly enjoyed this trip and the site, which wasn’t too busy at this time of year.  We’d certainly recommend it and look forward to returning, maybe autumn time or next Spring, who knows.  Next time though, we’ll probably venture into Ambleside itself and maybe also pay a visit to the nearby Victorian neo-gothic building that is Wray Castle, owned by The National Trust.   So much to see, so much to do 🙂